An investigator for an international non governmental organisation (NGO), Global Witness went undercover posed as a foreign investor in an undercover sting to expose the corrupted and fraudulent activities of the family members and business partners of Sarawak’s chief minister (CM), Taib Mahmud that was committed at the expense of the people of Sarawak in order to gain illegal profits worth millions if not billions of Malaysian ringgit.

Global Witness published an approximately 16-minute long short film, with a title aptly named Inside Malaysia’s Shadow State, perfectly describing the beastly corruption of Sarawak CM Taib, his administration, family and business associates. Although during the course of the film Global Witness investigators did not negotiate with Taib himself, the Global Witness investigator did negotiate with the other family members of Taib, which claimed to have a close relationship with him and those close acquaintances include his cousins, lawyers, and others. Those negotiations with his close acquaintances proved that those individuals had heavy backing from Taib Mahmud himself.

Public discussion roared post video being published and also after the investigation was picked up and reported by Malaysiakini.  Taib Mahmud was subsequently interviewed by reporters in which he denied having a close relationship with his cousins featured in the video. His denial is however, a mere denial in which the video still proves that his family members are involved in serious illegal business transactions that breach both criminal and civil law of Malaysia. And those criminal activities unfortunately are conducted by none other than the Sarawak’s Ministry of Resource Planning and Environment, which is headed by Taib.

As a political think tank, Political Studies for Change (KPRU – Kajian Politik untuk Perubahan) opines that the video released by Global Witness records Taib’s family as honestly and truthfully as possible without being slanderous. But, even with the expose on Taib, Najib’s administration seems to be disappointingly indifferent and at the same time, as usual, blaming the rest of the world instead of reflecting deeply inwards. Even the Malaysian Anti-Corruption Commission (MACC) seems to be suspiciously unaffected and neutral considering the gravity of the crimes committed by Taib and his cronies.

Sarawak is the largest state in Malaysia, an outback of bountiful natural wealth and resources such as pepper, cocoa, palm oil, timber and oil and yet Sarawak holds one of the highest poverty rate in Malaysia. 40 percent household of Sarawakian’s income the per capita are only worth RM 312 in which is a horrifying contrast to its richest individual – Taib Mahmud worth at RM 45.9 billion.

Barisan Nasional (BN) has held the ruling political power over half a century creating a one-party political system rife with corruption and cronyism. The administrative power of Taib Mahmud in Sarawak has remained unchanged for 30 years. The only change felt in Sarawak is the increasing gap of the Gini Coefficient, in which the income gap between the rich and the poor has unfortunately grown over the years. The GiNI Coefficient rate rose from 0.441 in 1989 to 0.445 in 2002, and 0.448 in 2009. (Gini index: 0 for equal, 1 for inequality).

According to the report “The Taib Timber Mafia- Facts and Figures on Politically Exposed Persons (PEPs) from Sarawak, Malaysia”[1] released by the Bruno Manser Fund pointed out that Taib’s wealth is estimated at $15 billion (RM 45.9 billion), enough to surpass the top richest man in Malaysia, Robert Kuok ($12.5 billion). And the Taib family’s assets is estimated to top at $21 billion (RM64.2 billion), in which the wealth is distributed in 400 companies across the globe.

The report also pointed out that Taib, who is also the Chief Minister of Sarawak of 30 years, holds the monopoly over timber harvesting and planting contracts, export of timber, providing services to other countries for the maintenance of public roads as well as the production and sale of cement, as well as other construction materials, in order to accumulate wealth for his family members and cronies.

The Taib family holds a 29.3 percent stake in Cahaya Mata or CMS. CMS is the main contractor for several state construction projects; including the construction of the new Sarawak State Legislative Assembly building worth RM300 million, the maintenance contract over 4,000 km of roads throughout Sarawak, and the maintenance contract over 600 km of federal roads in Sarawak under a 15-year concession awarded by the State Government.

In a stark contrast, the Taib’s family reign has left the public infrastructure of Sarawak to remain at a snail-pace. Sarawakians are left with a public infrastructure 20 years behind the public infrastructure felt in the Peninsular of Malaysia. More than 70 percent of long house residents are living without water and electricity; the state’s roads development index has remained at a low 0.38 percent, meaning, while Taib’s family drive around in fancy cars, the local residents particularly Sarawakians living in remote villages still rely on the river and boats as their main transportation mode. This is turn causes the students to travel long distances and to walk kilometres of road every single day in order to go to school.

Sarawak’s lack of basic infrastructure is one of the main causes of Sarawakians poverty in turn, negatively affects the economy of the locals to remain steadily behind the infrastructure development felt in the Peninsular.  In other words, Sarawakians are stuck in the past while Taib Mahmud’s family bathe themselves in billions of Malaysian ringgit belonging to the Sarawakians.

Deputy Prime Minister and also Minister of Education, Muhyiddin bin Yassin claimed that Sarawakians are blissfully living and working in content during his three day trip to Sarawak (February 27 to February 29). However, as shown by relevant data, Sarawak has one of the highest percentage of families living in extreme poverty in Malaysia. 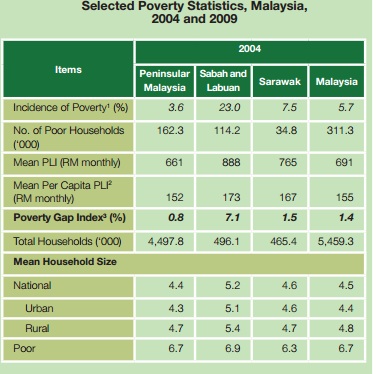 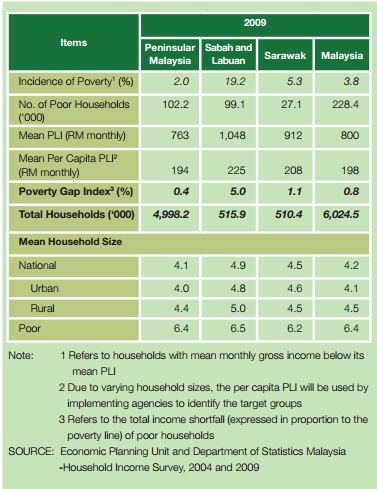 Based on that data, a total of 80 percent of Sarawakians earn an income per capita of less than RM1000 per month. Comparing that to the data from Department of Statistic Malaysia by 2011 to calculate the inflation rate of 3 percent per year, between 2004 and 2009/2010, Malaysians suffer an increase of 102 percent on residential, utilities and other expenses with transportation costs rose to 94.6 percent, and food and non-alcoholic beverages 60.9 percent. The average monthly expenditure per household stands at RM2,190.

It can be seen that even a family with two wage-earners, the standard of living is beyond their financial capabilities. According to the data provided by the Sarawak police, crime occurrences in Sarawak in 2012 stands at a total of 9,456, an increase 7.9 percent lower in previous years. However, the latest reports also pointed out that, in January 2013, the crime rate in Sibu, Sarawak as compared to January last year, jumped as much as 63.04 percent in the same period.

In other words, Muhyiddin is disconnected with the realities of Malaysians on the streets living in fear and living in poverty caused by greedy politicians and dirty politics.  Muhyiddin fails to see eye to eye and understand the difficulties faced by the ordinary Malaysians.

Where is the Allocations for Infrastructure Development?

Najib introduced a series of key performance indicators (KPIs) in order to strengthen the infrastructure of rural areas after replacing Abdullah Ahmad Badawi as Prime Minister of Malaysia. Hence, Sarawak becoming the focus of development under the 10th Malaysia Plan.

According to Table 2, in the 15 years from 2001 till 2015, Sarawak has received federal funding totaling at RM41.8 billion. Yet, within those 15 years, the citizens of Sarawak have not felt the development in public infrastructure as opposed to what was occurring in the Peninsular of Malaysia.

In addition, the 2011 Auditor-General’s Report also exposed projects handled without strict supervision, as well as several contractors found cutting corners in order to save money, resulting in badly designed roads and damages on the roads built incurred in just a short span of time post completion. Millions of ringgit have been spent on badly designed and lack of, if not, absent of quality infrastructures in which, fail to benefit the citizens of Sarawak. Hence, the lives of ordinary Sarawakians are arbitrarily jeopardised every single day, using those roads constructed by the greed of the few, affluent and influential.

Sarawak: The State of Dams

Sarawak State is Malaysia’s largest state with a dinosaur infrastructure. The BN lead government introduced the controversial project Sarawak Energy Corridor (SCORE) in 2008, with the plan to construct 18 large dams all over Sarawak, coal mining quarries, and oil and gas refineries. A relative to the Sabah Development Corridor (SDC), in which it was planned to develop Sabah into a center of trade and commerce, Sarawak’s implementation of the SCORE is visibly aimed to milk Sarawak dry of its rich natural resources at the expense of the Sarawakians and the environment.

SCORE was launched by Former Prime Minister and Finance Minister Abdullah Badawi in 2008 before the 12th general election. It is one of the five regional development corridors planned throughout the country. SCORE was expected to be completed after 23 years (2008-2030), at a total cost of RM334 billion. But the biggest beneficiaries are the Sarawak State Government-owned Sarawak energy corporation (Sarawak Energy) which received billions of ringgit worth of memorandums. 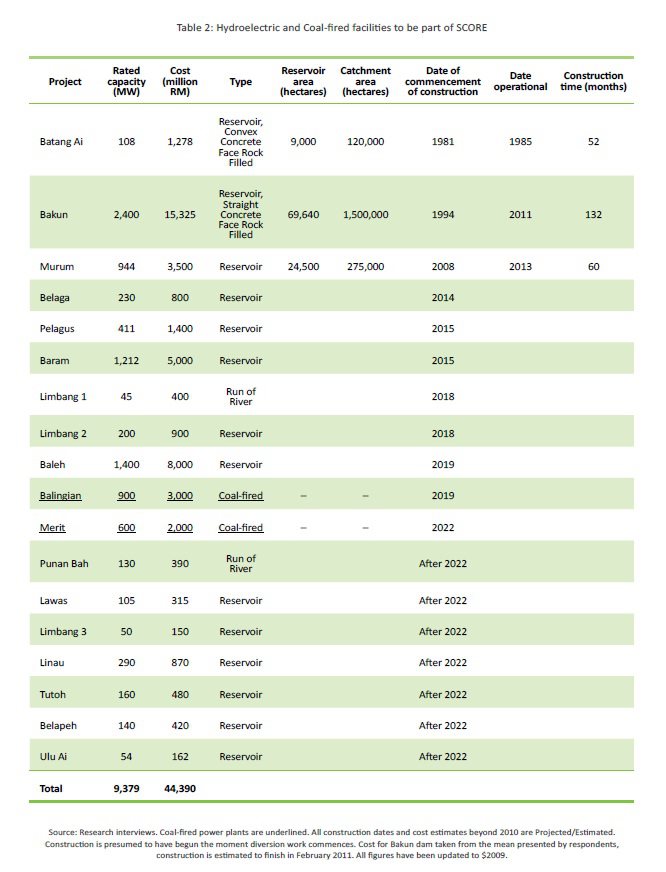 These large dams were constructed and planned to increase electricity supply. Yet the question is whether Malaysia is in need of that much wasteful energy? These plans do not even include nuclear power plant as proposed under Najib’s administration.

As expected with mega projects, huge portions of land are needed. Hence, native lands are robbed, illegally seized and sold. Prime million year old rain forests are destroyed; rare flora and fauna are killed and chased out of their homes; thus increasing the chances of human and animal confrontation. Lives are lost and at stake. The environment is notoriously raped without remorse. The lives and way of life of the indigenous are threatened, forcing them into the vicious cycle of poverty of “civilized” culture. Their heritage destroyed and burned to the ground. All for the sake of the greedy few with hands made of Velcro. Dipping their sticky fingers into coffers and taking what does not belong to them.

As per the words of Muhyiddin;

“Under the governance of the Barisan National, have not heard of people starve to death, but there is a part of the encounter the problem of obesity.”

Muhyiddin confidently believes BN will regain Sibu parliamentary seats in the 13th general election. However, behind every smile is a secret. The secret of Muhyiddin and those like him are greed and the fear of losing power.

Sarawak is known as the bastion of BN Due to poverty and the lack of access to knowledge and infrastructure, Taib Mahmud may have the added advantage over the poor of Sarawak, particularly those in the remote villages of Sarawak. To Taib, Sarawakians are easily bought over and bullied. To Taib, Sarawakian votes are his and only his. The relationship between Taib and his votes cannot be broken. But he forgets, all that is will not always be. Sarawakians are not blind; they are just precluded from their basic rights under his iron fists.

The BN regime may have the administrative power for 55 years and Taib Mahmud’s family have clutched 30 years worth of administrative power in Sarawak. They are blind to the beauty of Sarawak. Their blindness is caused by greed. The greed to rob, plunder and destroy. Their greed haunts them. As shown by Global Witness, Taib’s family are frauds with their fraudulent and illegal activities are laid bare for the world to see. According to the MACC, “With the emergence of new evidence, the anti-corruption and will take appropriate action.” In other words, the MACC will not take any action towards Taib nor his cronies. It would seem the only way to rid Sarawak of Taib and his cronies is for the citizens of Sarawak to rise up and realize only they themselves can save Sarawak from Taib as the Najib’s administration has no intention of saving Sarawak.

View all posts by KPRU Malaysia